Jim’s rings arrived safe and sound and to see them all on his mits is a sight for sore eyes.  That Little Voodoo there?  Solid 14K gold.  And it looks freakin’ amazing. 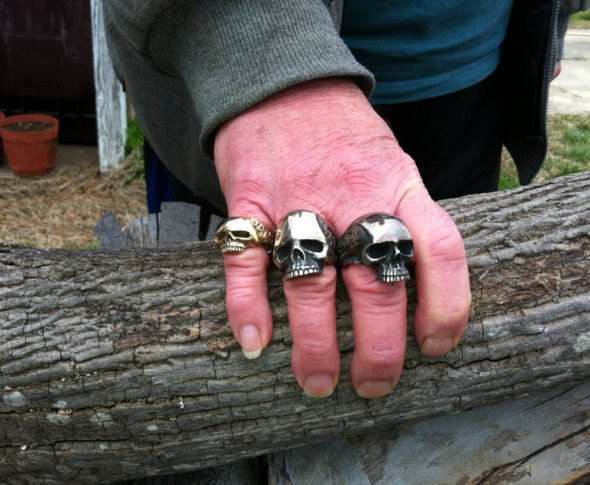 The other two are the standard sterling silver with custom patinas.   The Big Voodoo and Little Voodoo say “Toil” and “Trouble” around the back of the shank.  It was a little tricky to photograph because it wrapped temple to temple on both of them.

I don’t wear gold myself…but I gotta say the sleek look of that 14K Little Voodoo got me to thinking.

I started working on the new Big Voodoo ring at the American Craft Council’s giant shindig here in Atlanta.  I was invited to do a wax carving demo, so that’s what I did.   I took the opportunity to start the wax for the new line of Voodoo rings.  Some visitors were impressed.  Others…..well..not so much…

“what are you working on?”

Most of you have already seen this kind of thing before, but why not see it again?  I’m going to keep the entire process on the blog this time.  You can see the straight bar of wax with the center hole above.  That’s where I start.  Then I bust out the file and start figuring out the sculptural planes of the skull.  I didn’t draw this one out first (didn’t draw the first Big Voodoo either)  I just sort of riff on what I see and what the light tells me to do.

Then from here, it’s detail time.  I’ll bust out a sharpy and try different eye-teeth-nose configurations until I get something that jumps out at me.

..and I’m not saying I’m NOT going to discontinue it.   I really haven’t made up my mind.

Kind of thinking instead to make it like the McRib.  You know, bring it back every winter or something. 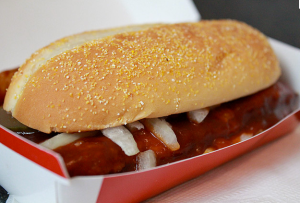 On the other hand, that’ s a real assholish thing to do, in my opinion.  I’m sitting at home right now wishing I had McRibs in my mouth and craving it like a goddamn crackhead.   I don’t want to withhold a perfectly good skull ring from clients just because I can.   What a dick move.

BUT if I were to discontinue the old Big Voodoo, it makes it more special for the clients who have already ordered them.  I’ve sold a shit-ton of them and most with some degree of really cool custom work.

Anyway, stay tuned for more progress on the new Voodoo line.  I’ll probably come up with some kind of half-assed contest to give away the first couple for free or something.

Custom skull rings always rock ( I still drool over them even though I can make the fuckers).  And nothing makes a ring more custom than setting stones in the eyes.

As far as gemstones in the eyes of skull rings, I’m usually a turquoise guy.  There’s just something about that sugar-skull aesthetic that works really well with the pale blue color of Southwestern turquoise.

I started working recently on a new way of setting gemstones using cast in place methods.  The shots below show a King Skull being customized out with some aviation-looking forehead lines and some cool Zen-style spirals on either side.

Most of my clients want fairly specific custom work, but because this one is a spec piece, I’m able to just sort of riff on the planes of the skull.  I just started carving and these lines kind of appeared.  After I was finished with the basic carving, I went ahead and set some massive white CZs in the sockets.

I’ve set gemstones in eyes before, but in the past I’d been using settings that I’d solder directly into the ring.  This worked great in pieces like the Cheshire Cat, but with a little help from my casting pal Chuck, I’m taking this fucker to the next level.  Now I can set bigger stones.  I think these bad boys are over 1o millimeters.

This fills the entire socket of the skull and looks MUCH more sleek.

I’ve done a lot of railing against cheap hollow-backed rings.  Generally I think they suck and if you make ’em, you suck too.  Thing is, the way these stones have to be set, the back of the ring has to be left open.  This lets the investment mold hold the stones in place while once the wax is melted out and keeps it sturdy enough so that when the molten silver rushes in, it doesn’t knock the stones free. 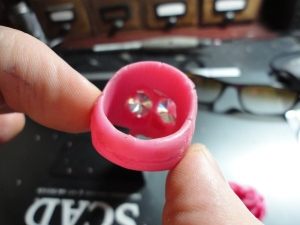 That aside, it also lets light hit the stones from multiple angles and makes the eyes seem to glow.  Yeah.  It kicks ass. 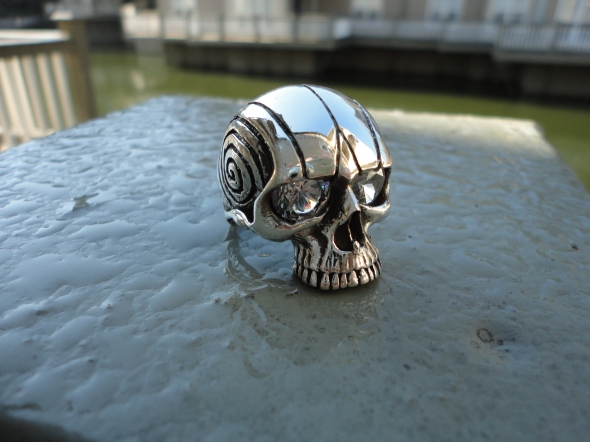 Yeah, major success.  Couldn’t be more pleased.  Not all stones can stand up to this kind of heat, but CZ, Ruby, and Diamond are among a few that can handle it.  Be warned.