I’ve had a few requests for skull rings with gemstone eyes recently and I have a pair that I wanted to show off because the results were just so cool.

This bad boy is a fully customized Little Voodoo with a pentagram centered on the forehead and a little bit of sugar around the shank.  Yet another example of how the Little Voodoo can be customized despite the small surface area.

This is a small skull ring, dig?  Or at least it’s small for my line.  It does best with one central image and then some minor ornamentation to support it.  Sometimes i get clients who request a smaller ring but have a ton of imagery they want to include.  If this is YOU, then you should really spring for the Big Voodoo.  Don’t worry about being able to ‘pull off’ a bigger ring.  It’s all about how you wear it.

Another red-eyed demon – this one a Jupiter with the stones set DEEP in the socket.  Fangs as well.  Pretty slick, right?  This was a tough one to build.

And then there’s this: 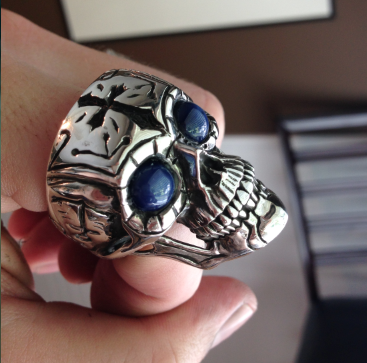 This is a Jupiter Skull ring with blue sapphire eyes.   Kinda hard to see in the photos, but there’s even a starburst specular highlight in the stones.  This is another example of the Jupiter ‘sugared up.’  Yeah, its a big ring, but we can fit a lot more imagery on the surface too.

I’ve also had a few requests for a smaller, more understated ‘realistic’ skull like the King Skull or the Jupiter….something about the size of the Voodoo, but with the classic lines of the realistic series.  I’m eventually going to do something like that, but I haven’t finished the Gentleman yet either and I have to take one thing at a time.

Still on the waitlist right now, but I’m taking new orders in late August so hang tight and stay tuned.