After a summer of carving and hacking, casting and polishing, the Evel Knievel ring is finished and on its way to Robb.  She’s chunky and will definitely leave a few accidental bruises on loved ones and unlucky friends, but man, what a piece.

I think Robb is a chef and that puts him in a distinct class of people that I’m very happy to make work for.  I was a short-order cook when I was a teenager and I worked in the restaurant and food service biz starting at 14 years old, so while I’m not a chef myself, I definitely respect it as a warrior class if you know what I mean.

I also had this badass Evel Knievel toy when I was a kid.  Remember that?  Well I was thinking about it the entire time I was working on this ring.  Evel was a freakin’ superhero in the 70s and 80s.  It’s hard to imagine someone like that being an A-lister now, but he was.  You’d even see updates on his stunts on the national mainstream nightly news.

Other than that, my summer has been slow and steady.  As I’ve talked about, I’m not taking as many orders as usual and trying to focus on some other projects.  I do have some cool pieces in the pipeline right now, but a good deal of my time has been spent moving my shop to bigger and better digs and grilling all kinds of dead things on my webber.

It’s really been the summer of the Jupiter.  I’ve had a number of people ordering custom skull rings and while the King Skull was leading the pack for years, there’s  been a rush on my big, hulking, full-jawed Jupiter ring.

I’m working on a custom job that may or may not ever leave my shop using jade eyes and some sugar treatment along with a central image of the Five Rings from Miyamoto Musashi. 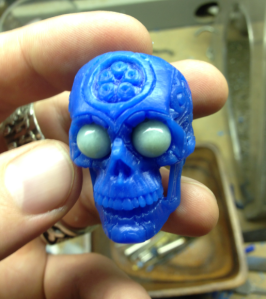 But this one is a long ways off from casting still.  I’ve been working on it alongside one of the coolest King Skull requests I’ve had in a while.  While this Jupiter is completely covered in scroll work and detail-carving, I’ve had a request to do a reduced “aged” King Skull with minimal lines and a streamlined brow.

This may be a ‘thing.’  In other words, I’m pretty happy with the way this looks and I wouldn’t be surprised if I had a run on this kind of simplified form.  I’ve also had a lot of people emailing me and asking if they can get ‘minimized’ skull rings like this.  Obviously this takes inspiration from Courts and Hackett’s Keith Richards ring, but interestingly enough it’s rooted in how the ring looks NOW as opposed to how it was originally designed.

As you can see, all of the detail is word away into a smooth surface, leaving the basic shape of the skull, the nose and eyes, and a smooth half-cylinder that used to be the upper jaw.  Of course, the King doesn’t look like the Richards ring and NO, I won’t make you a copy of the Richards ring (still get 1 or 2 emails a week asking for that) but the idea of a smoothed-down ring is clearly yet another conceptual tribute to the ring that started it all.

I’ve talked about these cats before, but if you aren’t a long-time reader or you just have a short memory, swing by Courts and Hackett and pick up their Death’s Head ring.  If you’re a skull ring collector, not having one is like collecting fine Swiss watches and not owning a Rolex.  More on that later.

I’ve been in Hong Kong for a few weeks but I’m back in the states and ready to finally finish the Evel Knievel ring.  This one is totally custom from a raw block of wax, so it’s slow going anyway, but I’m about ready to cast and it’s about damn time.

I’m real happy with how it’s going, but I’m a little concerned about the size.  This thing is going to be heavy.  The shank is well-balanced, but the Evel “V” is huge and thick.  I’ll have to get some client feedback on this bad boy before we decide if this is too much. 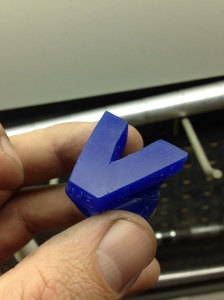 Everything is done but the stars.  They’re going to take a minute.  It’s not like I have a stamp or anything.  I’m hoping to finish up the wax this week, take a quick 2-day jaunt to visit Elvis in Memphis, and then cast this sucker.

Meanwhile, a quick shot of another finished Jupiter with the brushed finish.  This is quickly becoming my most popular piece along with the Tiki.

It’s been a while and I just had to sit down and throw up a few custom jobs that have me pretty excited.  A few I’ve just wrapped up including one LONG TERM project that took me the better part of five months to finish.

A client threw this one at me back when we were all wearing coats and I have to admit, I just didn’t get the concept at first.  He had worked the whole thing out – knew exactly what was supposed to go where and how it was supposed to look.  He did what I usually like clients to do which is REALLY think out what imagery was supposed to be worked into the design.  Problem was, I really didn’t think it would come together the way we were talking about it.  He’d say “put this here and put that there” and I’d kind of think “okay…gonna be a trainwreck.”  But hell, this ring came out great.  More than great.  I was very, very happy with it to the point of wishing I’d offered something like this as a regular part of the line.

We’ve got some great texture worked into the shank with a classic 3/4 skull and crossbones on one side and a buddhist wheel on the other.  Big cock on the shank.  No, I’m not kidding.  And guess what, it looks badass.

The front features the wrapped snake and Abraxis with his two snake legs, whip and shield. 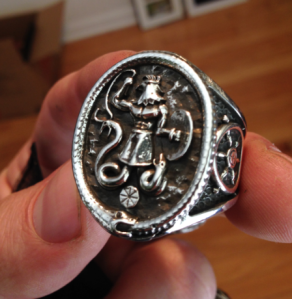 Google it.  I think it all ties together.  Very cool project and definitely a one-of-a-kind piece.

Speaking of one of a kind pieces, I also had a client come back to me after ordering a Torque and want a full custom skull ring to go with it.  I dig this.  First of all, that’s kind of my thing: a big ring and a bracelet on the same hand.  I used to offer a special on the Full Right Hand that packaged these together.  Second, the concept was great. 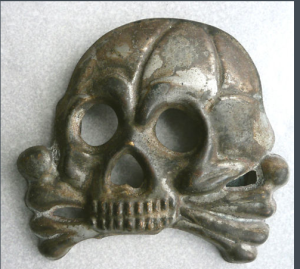 This is the emblem from the Prussian Totemkopf.  There are some pretty amazing photographs of these calvary badasses in full regalia.

It’s got distinct round eyes with bone ridges completely encircling the brow.  No bottom jaw.  I was adapting this a bit since we can’t do a good 3/4 version that would wear comfortably, but I think it’s pulled off rather well, if I do say so myself.

The trick is, when a client brings in a concept for a 3/4 view skull ring, to design the ring straight-on that will look accurate from the 3/4 view, but still wear in the round.  It’s hard to explain, but you can see in the photo above that the skull has the same basic sculptural planes that the reference does once we turn the skull’s head.

It’s always a blast doing Jupiter rings or a one-off skull like this one (which started as a Big Voodoo, believe it or not) because I feel like it’s going back to my roots as a skullsmith.

Not to be outdone, I also had a client order her fella a custom wedding band with a series of small skulls nested in the shank.

When I do a band, I still want it to be hefty.  Nothing is worse than one of those cheesy paper-thin bands that was obviously formed out of a piece of wire and soldered together (which is basically how it’s done 90% of the time.)  This one is cast all in one piece.  And the result is a lot heartier and more satisfying. 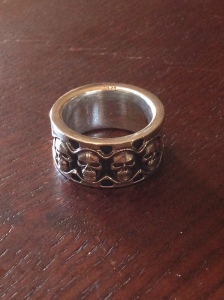 Still comfortable as well, since I comfort-fit the inside of the shank.  But this bad boy won’t squash into what I call the “five year oval” that many of the thinner rings become after they’ve been squashed and stretched into oblivion.

Last, but not least, I’ve got an AWESOME project on the bench for a client interested in a full custom piece.

We’re doing one for the man.  The Evel Knievel ring is underway.  It’s hard to explain to young people what a big freakin’ deal Evel was, even by the 1980s when I was growing up.  Well, we’re doing a ring for Rob to honor Evel and his bike.

This one is based on client sketches that I’ve adapted into something very wearable that uses all of Evel’s imagery.  Another longer term project that’s going to take some time to get right, but it will be worth it.

The block-out is done to a size 10.  Fits like a glove, but she’s heavy and solid as well.  We’ll keep hacking away at this one and post updates as we go.

One of the reasons I’ve been away from the blog for a while is that I’ve moved into bigger and better digs.  I’ve got a new place and a new studio with more room for metal work.  Very happy.

The bad news is I’m also going to be back in Hong Kong for the month of June and this means I won’t be able to work on any pieces while I’m gone.  So if you have a project in mind, email me and get on my waitlist.  I’ll get to it by the end of June and try to get your piece knocked out as quickly as possible without sacrificing the quality that we both want.  Stay tuned!