Yes, I’m back on the bench.  Happy to be back, too.  Got a lot of projects wait-listed from motorcycle club rings to wedding bands to full custom jobs to the good old fashioned custom skull rings.

A couple of things will be changing in 2015.  I’m going to pace myself a bit better, not rush multiple jobs or take on more clients at one time than I should.  I got into this business to focus on individual clients and when I’m knocking out 20 or 25 rings at a time, that just isn’t happening.  So don’t be disheartened if you contact me to place an order and I ask you to hang tight for a few weeks.  I’ll get to you.  I just think your project deserves my full attention.  If you doubt my intentions, know that I was invited to create rings for the Sons of Anarchy season finale event and I declined because I wanted to deal with individuals like you guys.  Yes, I’m Jerry Maguire.

Speaking of individual clients, this post is largely for Dylan who has asked me to make a custom Tiki ring with a gemstone.  I’m feeling the amber.

I picked up these stones on Lamma Island a while ago, but I only have a few left.  I still have one of the bright yellow ones from the far left and the four transparent stones on the right.  This isn’t cheap amber.  Not that resin, assembled shit you get in the states all the time. 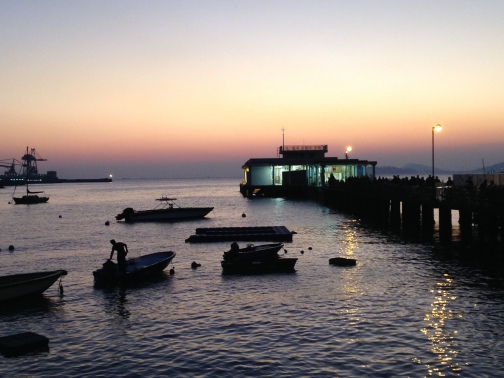 This is Lamma.  I get off the ferry here after about a 45 minute ride from Hong Kong island.  It’s a tiny little fishing island and I hike right over the mountain to Yung Shue Wan to visit the Lamma Island Amber Shop. 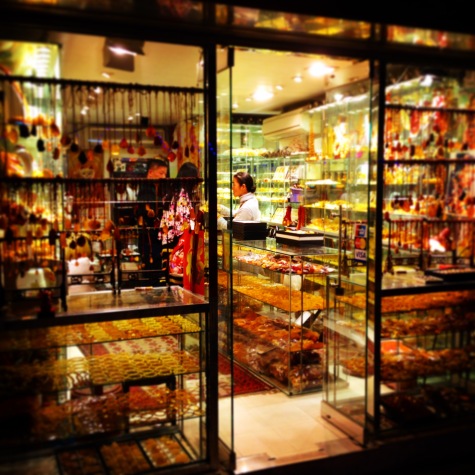 Cool right?  This shop is tiny and set into a dark corner of this tiny little road called “Main street.”  I’ll usually swing by this great joint called Lamma Grill for a whiskey and the closest thing to a great American cheeseburger you’re gonna find and then find this shop which is practically GLOWING like a gemstone. 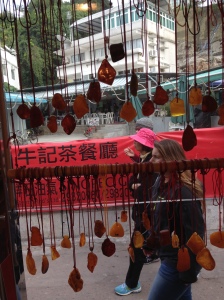 The place is run by Udo and his wife.  That’s Udo below selling amber in Tibet in ’92.

I freakin’ love this place.  I spend a lot of time looking through their stock and their finished jewelry.  I’ve made a few skull rings with their amber set into the eyes.  Just a great place.  I wish I could just import from these guys regularly, but the demand for amber just hasn’t quite caught-on in the US yet.  So what I usually end up doing is swinging by to pick up gifts for family and friends.

So yeah, if you’re ever in HK, catch the ferry at pier 4 to Lamma and visit them.

So Dylan – let me know what wer’e gonna do.  Drop me a line.  And I’ll catch the rest of you cats in the next week.  Stay tuned.

I’ve just finished a new wedding ring with a massive jade stone and I had to show it off.

This isn’t a client piece, actually.  This one is for me.  I wanted to make a new wedding ring that was massive and used a jade gemstone as the prominent feature.  I found the stone in Hong Kong and I started sketching on the plane ride back to the US. 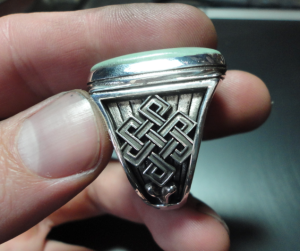 I also thought this was a great follow-up to my bitching rant about lightweight jewelry.  This ring is solid sterling and completely massive.  And it’s an everyday wear.

I don’t think I’d posted a ring that was all about the stone in a while, so this is long overdue.  If anyone’s interested in a piece like this, email me and let’s talk.  See?  Not all skull rings, right?

Bangle update coming soon!  I’m getting ready to take a few days actual vacation, so it’s time to get crackin’  Got a lot of waxes to finish before I hit the beach.

Your boy here is going back to Hong Kong for a while, so I’ve got to warn everyone that all orders received after Wednesday of this coming week probably won’t be delivered until the beginning of August.  Bummer, eh?    Not really.  Especially if your ring requires jade.   If you want to order, go ahead and get in touch with me and we can at least start on the designs.

I’ll probably be sketching your piece out in a place like this:

…which is the kind of joint I usually eat in when I’m out there.  That photo is actually where the wife and I had our anniversary dinner.  I’m not kidding.  I don’t know how to explain how great Hong Kong is to people when they ask about it.  Just imagine yourself living in the movie Blade Runner, but with amazing food and no cyborgs to kill. 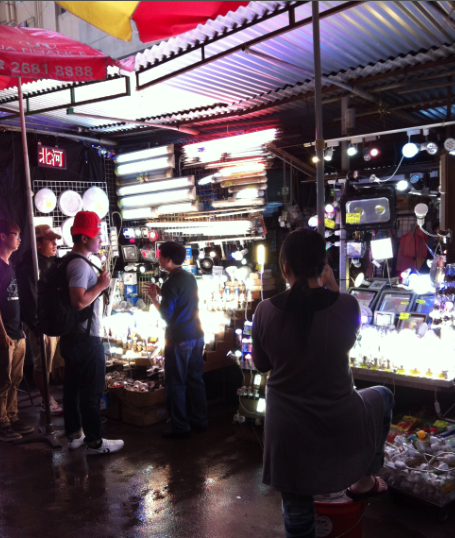 I’ve had a few clients in Hong Kong over the past year.  I’ll be hanging around Ivan’s at night or smoking hookah on Cochrane St near that Lebanese joint.   Any of you who spot me out there and approach me to order get yours on the house.

That’s me an Ivan.  Cool dude.  I’m looking forward to doing shots of his wife’s vodka back in his walk-in freezer in a few weeks.  Also going to visit my pal the Savate fighter who bounces in Central and the calligraphist and philosopher who lives on the side of the mountain in the new territories near the 10,000 Buddhas monastery.  Yeah, pretty much everybody out there is straight out of a movie.

As many of you know, I’ve been in Hong Kong for the past few weeks.  Not a vacation – I wish.  No, I’ve been working.  Took some time out to visit the jade market and see what’s what.  Also hit the markets in Mong Kok and Jordan to check out the silver.

The dudes in Hong Kong have their bling together.  Well, some of them do.  What you have to understand is that Hong Kong isn’t just Hong Kong island anymore.  You’ve got Hong Kong central and then you’ve got all of these outlying areas including Kowloon.  There’s a segment of the male population that I really dig and most of them seem to frequent the Kowloon side.   These guys are iced up in silver.  Usually a big, hazardous-looking necklace and then big freakin’ bracelets.  Always.  Even in the gym.  Not little tennis bracelets either (which, if you’re a dude, you should NOT be wearing.)  No, these guys wear GIANT SHINY silver bracelets with all kinds of big honkin’ link styles and clasps.  Ever see The Expendables?  Steaming pile of shit, no doubt, but the boys had their jewelry together, right?  That’s Kowloon.

The OTHER side of this coin is the upper-class Hong Konger.  These are the dudes (and chicks) who wear 400 dollar glasses without lenses in them.  ???

This bears repeating, even in print.   THEY WEAR GLASSES WITHOUT LENSES IN THEM.  Bodes well for the jewelry right?

Is that the saddest thing you’ve ever seen?  Common in ritzy shopping districts all over the world.  These pieces are packaged like fucking mochi rice sweets in a aquarium of high key light. 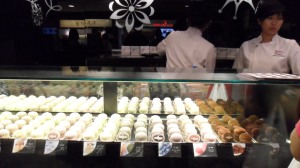 It isn’t surprising.  This kind of absurd other-worldly display is the only way to make these minuscule, insignificant, and totally generic pieces look appealing.  It’s even more frustrating to see actual creative work having it’s balls cut off in similar displays like this one: 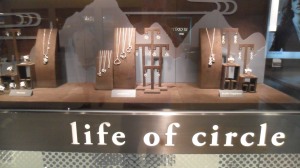 So, yeah, if you look at this shot, the pieces are actually quite interesting.  Hong Kong is full of stuff like this.  We just don’t get this kind of creativity in the states (at least not in the mainstream outlets.)   Still, we can’t stay away from the ridiculous metaphors here, can we?  “Life of Circle” was likely meant to read “Circle of Life” and although I’m sure the designers were thrilled to have their work named after one of the most souless songs ever recorded, the overall branding and display just says “you can’t afford me.”
This is funny.  First of all, there’s no way this stuff is worth more than custom work.  Second, you ever notice how those of us in the custom field can just shoot our work any old place and it still looks good?  Right.  That’s because the pieces are….wait for it……designed to be WORN in public.  Tony Creed shoots his stuff outside on what looks like some kind of a cheap-ass picnic table.  The Deadringers guys photograph their stuff in their WORKSHOP for chrissake.  I shoot my stuff on my front porch.  Hell, here’s a shot of my ring and John’s Mystery Cave out for a drink in Hong Kong at a place called “the Pawn.”  (One of the coolest bars I’ve been to, by the way.) 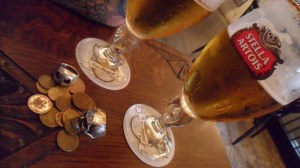 Those rings are worn as hell (we wear them every day), shot under terrible lighting with a shitty camera on a beer-stained crap wooden table with about 1 american dollar’s worth of HK coins.  This kind of environment makes good jewelry happy.
Anyway, rant over.  I expect Ian and Shawn’s rings to be done on Monday and I’ve just had a new order in for a Little Voodoo.  I’m seriously almost out of the waxes for these.  Take a look: 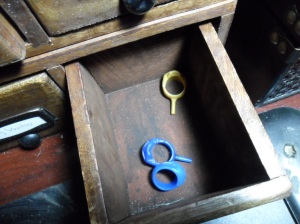 That’s three left minus the one G just ordered.  Once these suckers are gone, I’m not sure if I’ll be making them anymore.  I like the idea of retiring a series after it’s had it’s run.