David’s custom Big Voodoo has finished and shipped out to Singapore.  Bon Voyage.

Good for David.  Put the text right there on the outside of the shank like a champ.  Nothing more chicken-shit then doing your engraving INSIDE the fucking band where nobody can see it.  If it’s important enough to say, say it where people can actually SEE it.

Now that isn’t to say I’m totally against carving inside the shank.  Especially if there’s a little hidden gem reserved just for you, but this works best in addition to something on the outside.  Example of this would be that Ladybug ring I made for that badass Marine and his wife.

David got some of that going on too.  See below.

That’s not Free the Whales.  Love that.   Hope you dig it, David.

I’ve been working on some other projects as well.  I’ve got kind of a super secret thing going on that I’ll likely be able to announce later.  For now, all I can show you is a wax in progress for said mystery project. 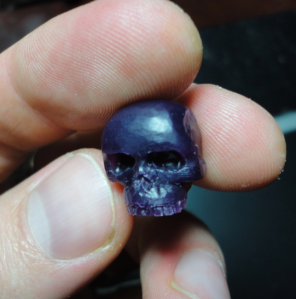 Also put a dent in an Elvis tribute ring I’ve been dying to do for a while.  Kind of a take on the great Lowell Hays TCB ring.

That’s obviously not my style, but I love the concept and the overall shaping of this piece.  So I’m taking a different approach to this design.  I wouldn’t want to copy it anyway.  I’m just paying  tribute to the king and his jeweler.

So far this is all I got:

Doesn’t look like much yet, does it?  Screw.  That F’ing thing took me all goddamned morning.  Can’t really tell from the photograph, but I’ve tapered and sized the ring.  The top is still flat and square, but now I have to shape it to match the massive turquoise stone.   Stay tuned for more on this and my mystery project.

This is a long-term project for me.  The infamous TCB bracelet.  I want this mother to be huge.  It’s an ID tag style with custom links and lots of detail work.

I’ve thought about why Elvis and TCB is so important to me.   Its a little strange, after all.  TCB (taking care of business) was Elvis’ motto and the motto for the memphis mafia.  Elvis even developed this stupid karate style called “TCB Tecnique” and wrote out a series of rules that one must live by in order to be part of the TCB thing.  Its the kind of genius-borderline-nonsense  only drugs can bring.

I’ve been to Memphis.  I’ve been to Graceland.   Its like being in Rome after the fall of the empire, only this empire fell just a few decades ago.  The place is full of tragic heroes.  Some of them are dead and many of them are still walking around in that social space in-between vagrancy and employment carrying guitars….capable of doing amazing things on those guitars that the fucking populous doesn’t care about anymore.

I’m not a huge fan of Elvis music.  I suppose I’m more a fan of the man.  He’s better than anything Shakespeare could have written.  I love “Separate Ways” and “Blue Moon of Kentucky,” but I love the ghost of Elvis even more.    That’s why I want to make this bracelet.   Its hard to explain to people who don’t put suffering and tragedy in the same place as creative success.

Condensing everything Elvis and his crew have said and written, in essence “Taking Care of Business”  means “man up, strap up, and get shit handled.”   Kind of my creed.  I want to keep that in the tag itself.  As for the links, I’m going to explore the more cerebral part….the ruins of the empire and the ghosts that still walk there.