I’ve already blasted this all over social media, but for you traditionalists out there, here’s the finished Tiki ring for James. 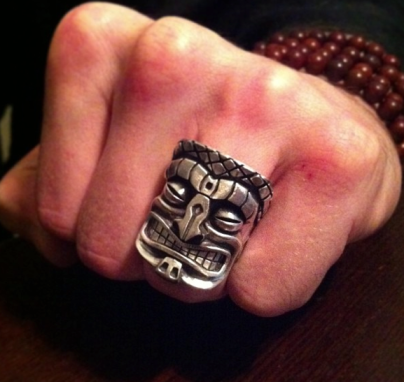 James was very specific about keeping the profile of the ring close to the finger.  Kind of the opposite of the King Skull, which is a real gob of silver.  So as crazy as it sounds, this big boy is actually extremely sleek. 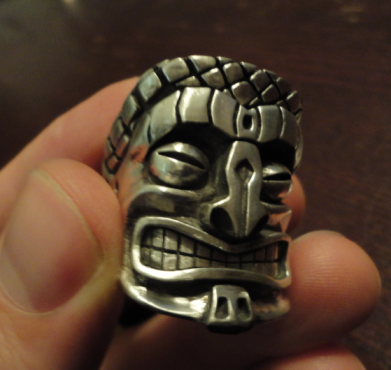 The response to this ring has been extremely positive.  I’ve been getting a lot of email requests for rings like it, so I’m seriously considering offering  a version of this ring (not EXACTLY like James’ ring) for sale on the site.

Overall, I think we know that my main site at http://www.mtmaloney.com needs a major, major, major upgrade.  Talk about shitty product shots.  If you just visit that site and not this blog, you really don’t get a sense of the kind of work we do here at the skullworks.

Well, perhaps this ring will show up on the new page.

Wow, I got a whole bunch of waxes done thanks to my pal Adam, who helped me cast all these f’kers from my master molds.  I’ve had some patient clients waiting for Big Voodoos and now I can finally start carving on these base casts into voodoo magic.

What have I been doing in the meantime?  Finishing up a few King Skulls, a Little Voodoo, a few custom orders, and Sue’s mega mystery cave.

Then we have Chuck’s badass Little Voodoo. 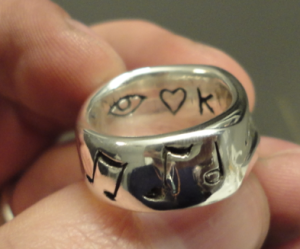 Normally not fancy enough for me to blog about, but I just don’t get enough engraving requests on these LVDs and I thought I’d show one off.

Big news is that Sue’s Mega Myster is almost finished.

BIG and HEAVY.  Sue must be strong as hell because this thing weights like 6 pounds.

We’re not quite done with this, though.  We’ve got some special work to do in the eyesockets.  Something kind of subtle and cool.  We’ll get back to that.

In the meantime, happy new year to all of you battlecats.  I’m planning (still) on a few new base rings this year, so stay tuned.

Where do I begin?

I was in Hong Kong again- a city I just fucking love.  A little business, mostly pleasure.  I was able to stay on top of client work while I was away, but needless to say getting back to the shop was a necessity and I’m now almost buried in silver, wax, and polishing compound.  That shot above is me at my new favorite Russian joint in HK.  Place is run by Ivan.  Awesome.  Ivan kept us thick in vodka and various delicious Russian fare for several nights.

We ended up doing shots with Ivan in his walk-in freezer.   This is basically how I do Hong Kong whenever I’m out there.   Great people, great food, and places right out of Blade Runner where they serve steamed fish and mainland beer underneath a canopy of neon and steam vents.

I’ve had some great projects in the works that I just haven’t had time to post about.  I’m hacking away at waxes as fast as humanly possible and the shit is EVERYWHERE . Wax dust in my clothes, my nose, my food, my hair….freakin’ everywhere.

Some cool pieces too.  For example, we haven’t talked about Sue.  Sue has ordered a mega-mystery cave.  What is that, you ask?  It’s a giant Mystery Cave with a super-thick shank and a heart-shaped nose.

This project is stil underway, but you can see the progress above from a block of wax.  The result is a big gob of silver roughly 3/4 larger than the standard Mystery Cave.  I’m still working on graphics on the forehead.

That image is going to end up being a German Eszett like this:

I’m throwing these shots up to get some feedback, so Sue- let me know what you think.

I’m also working on a series of King Skulls.  The one below is for James.  We’ve got “Memento Mori” on the forehead along with a crossed set of bones.

This is good news for James since his wax is finished, but might be bad news for everyone else because I literally have 2 King waxes left (which will likely be sold in the next day or two.)  So that leaves a big empty wooden drawer where my waxes used to be.  Obviously I have a mould and can run more wax duplicates of the base template for this ring, but at the same time I’m considering terminating the line and starting a new master wax of a second series of skull rings.

Same with the Big Voodoo and Little Voodoo.   Wouldn’t it be cool to know that each version of these rings is a limited run?   That way if you own a 1st generation King Skull, you’re even MORE of a badass than you thought when you first put it on.  The second version wouldn’t be BETTER or WORSE, it would just be a little different.

We’re making that bad boy for a client named Marty.  It’s a one-off, so we’ll be starting from a slab of wax.  Can’t wait to see how this turns out.