This was the third film and just like the third film in the Jaws series, it’s in 3d.  This is great because it fills the film with random images of people pointing things out at the camera in that “doesn’t THIS look cool” way that early 3d films had about them.  The fact that the DVD is not 3d just makes it hysterically awesome. Want a random scene of a guy sticking a broomstick into the camera, you got it.  Want to see a worms-eye view of a guy playing with his yoyo?  DONE.

This guy is the greatest character in the history of the moving image.  What’s his name?  Shelly.  You’d better remember that too, because if anything goes wrong, it’s his fucking fault.

This moron is totally, universally, and roundly hated by everyone in the film.  They react so strongly with so much negativity to everything he says and does…just the SIGHT of him….it’s freaking hilarious.   For example: all of the characters rib each other, constantly joking and just having a good time.  Shelly shows up and contributes to the conversation or plays a part in the prank and immediately it’s

“God DAMMIT Shelly, I’m so SICk of your SHIT! “

“Holy shit, why don’t you just go off and DIE, Shelly, you worthless stain of a human being….”

They just all hate Shelly.  And there’s NO redemption for him.  He just blunders through the film being hated, ruining everyone else’s good time.

Shelly: “Well I can’t go on that ride anyway because they say I’m too fat.” (Sad face.)

Everyone Else:  “You’re goddamned RIGHT your too fat you stupid, lazy, BASTARD!”

This continues on until finally Shelly is blissfully murdered and the stain of human excrement that was his soul is whisked away from the earth.

You have to watch the film to really understand how great this is.  My friends and I have even taken to calling each other this in real life when one of us screws something up.  It’s also the beginning of an archetype in horror movies that we’ll see again and again:  the loser friend all the popular kids hate….who gets killed and never redeems himself.  He’s like the opposite of Charly from Critters.

This chick name Vera compliments Shelly in one of the scenes, saying she likes his juggling.  (NOTE: He juggles.)  Then he says something like “Hey, Vera….you know, your’e really nice…”

She cuts him off with something to the effect of “hahaah, no way Shelly. I’m going outside.  Screw off.”

The film gets better.

There’s a motorcycle gang.  That’s them about to whip up on that stupid sonofabitch Shelly. 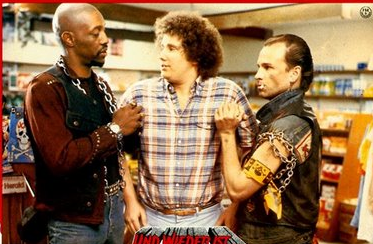 There are three members of this gang and they have to weight 280 pounds combined.  They are absolutely fantastic.  Shelly and one of the chicks run into them in the pharmacy when they are buying supplies.  The music in this scene is this fantastic early 80s disco beat which plays while we witness how hardcore these bikers are.  Let’s say there is some epic sweetness.  Fist pump!  They go around causing mischief until they are all murdered while playing swingset in a barn.  Yes, that happens.

The group of teenagers in this film are also friends with two 50 year old potheads who hang out and explore the camp in a very scoobie-dooish kind of way.  Your’e so happy when they finally bite it.

We also finally get to see Jason in his hockey mask, which serves better than a guy with a bag on his head.  And who discovers the hockey mask to begin with?  The one that Jason ends up using?  You guessed it:

Thanks a LOT Shelly.

So this film also has some fantastic 3d-style deaths with popping eyeballs, flying harpoons, and other IN YOUR FACE 80s effects.  Rad.

For what it’s worth, this is one of the creepier Jasons as well.  He’s just big, lumbering, and dangerous.  More real than in the other films.

I’m going to watch 8 of these films, so we have 5 more to go, and I don’t love them all as much as I love this one.

One thought on “Friday the 13th Part 3: The greatest movie ever made.”